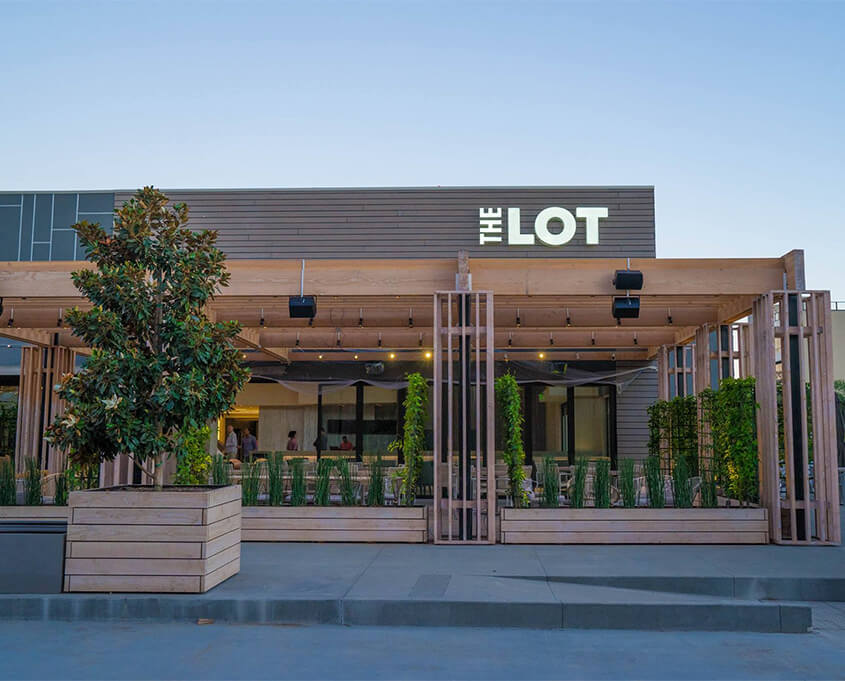 By Lori Weisberg | 1:12 p.m. Sept. 30, 2015
The Lot will bring together a multi-screen theater, upscale restaurant, bar and specialty coffee venue under one roof in La Jolla.

Starting this week, catching a movie in La Jolla is going gourmet. Expect to trade in your buttered popcorn for a pre-movie repast of a roasted mushroom flatbread or a grilled New York steak before settling into your leather recliner with a craft cocktail.

The first of what are expected to be several new luxury cinema and dining complexes known as The Lot opened Wednesday in the former Jonathan’s Market on Fay Avenue. The seven-screen theater and dining destination will include not only an upscale restaurant that seats 90, but also a bar showcasing craft cocktails, beer and wine; a cafe featuring coffee from local roasters; and ample outdoor seating with retractable shades, a vine-covered trellis and fire pits. Each of the seven auditoriums will seat about 60 people.

The Lot’s owner and CEO, Adolfo Fastlicht, formerly of the Cinepolis USA luxury theater chain, hopes to replicate his movie-viewing and dining hybrid throughout California, beginning with the second Lot planned for Liberty Station early next year.

Fastlicht’s hope is that the $18 million La Jolla development will be a draw not just for the devoted cinephile but also for people interested in eating out or stopping by for a specialty coffee and dessert or a drink.

“We wanted to push the envelope with this,” said Fastlicht, who parted ways with Cinepolis three years ago over differences in opinion over future development. “We’re not only in the premium cinema business, but the lifestyle business. There are other firms that have built a restaurant in or next to the theater and some are great. But ours is the combination of the real estate location, the layout, more like a boutique hotel that has the different components together but also separate.”

All that luxury comes at a cost. Movie tickets will start at $22, while a margherita flatbread at the restaurant will go for $15, and $29 will get you a slow roasted salmon entree with a shellfish dumpling.

In addition to the restaurant and bar menus, there will also be in-theater dining where movie goers can order from their seats. The restaurant, which will offer Mediterranean and Mexican-inspired dishes, will be helmed by San Diego Chef Matt Sramek, formerly of Avant at the Rancho Bernardo Inn and Amaya at the Grand Del Mar.

Fastlicht is full of hubris as he excitedly boasts that his new theaters will be unrivaled throughout the world. He got his start in the movie theater business more than two decades ago with the launch of the Cinemex chain in Mexico. After helping shepherd the company’s foray into the luxury cinema genre, he and his investors sold Cinemex to a Canadian private equity firm in 2002 for more than $200 million.

He didn’t return to the industry until 2009 when he joined Cinepolis USA as CEO and a co-founder.

“As I surveyed the theater landscape, I came to the conclusion the U.S. had many movie theaters — over 40,000 of them — but there were very few upscale premium theaters so my logic was that the U.S. market was primed for specialization,” Fastlicht said. “The U.S. consumer is a very sophisticated consumer. So I thought, what happens if we import what we did in Mexico with the platinum concept.”

His experience with Cinepolis, which has three San Diego County locations, primed him, he said, for conceiving The Lot, which he insists will be an even more premium experience than its forerunner. He has been actively scouting locations for more theater projects, from San Rafael and Mill Valley to Los Angeles, Beverly Hills and Laguna Niguel. In San Diego County, he’s exploring downtown, North Park and Hillcrest and has had conversations with two North County developers.

“We want to become that destination in those communities that have lost their neighborhood theaters or their retail concepts,” Fastlicht said.